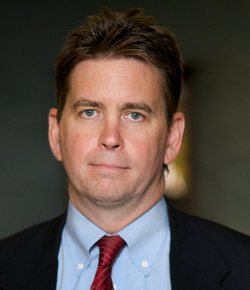 Following in the footsteps of his father and older brother, Jon Haggerty attended law school after completing his bachelor’s degree. During law school Jon served worked as a bailiff for the Marion County Courts during the day and attended law classes at the Indiana University School of Law in Indianapolis at night.

Jon met his future wife Tammi while they both were attending law school. She also attended night school and worked during the day for the Marion County Prosecutor’s Office as a paralegal.Upon graduation from law school, Jon became a partner at the firm in 1994.

When you go to law school, you think of legal arguments and logic, but when you practice law, you deal with people, listen to their problems, understand their emotions and concerns, and help them to navigate through the legal framework to try to resolve the problem.

While my practice includes a number of different legal areas, my primary focus is on helping people find a solution to their legal matters based upon their objectives.  Often, the best results are obtained through creativity and a focused commitment to taking the time and devoting the energy required to achieve a good result.  While we cannot promise that we will win every situation that is adversarial, we will work tirelessly in seeking to achieve a positive outcome.

Jon and Tammi have four sons, all of whom attend school in Perry Township. They are busy with the many activities the boys pursue. Jon is an adult leader in Boy Scout Troop 499 and the Den Leader for his middle son in Cub Scout Troop 134.  He sometimes helps out to coach practices at the Perry Meridian Elementary Wrestling Club https://perrymeridianwrestling.com.  The boys’ other activities include Travel Soccer at the Saint Francis Soccer Club http://www.stfrancissoccer.com/default.aspx, New World Youth Orchestra http://www.nwyso.org, creative writing club, running club, spell bowl, and math pentathlon.

X
Blackstone Professional Center
3045 South Meridian Street
Indianapolis, IN 46217
Phone: 317.786.2225
Fax: 317.786.5263
By submitting this form we will take no action to protect your interests. Submission of this form does not estalish an attorney-client privilege. Please do not submit any confidential information through this form.
We accept Visa, MasterCard, and Discover. We are AV Rated and conveniently located near Southern Plaza.